Several weeks ago while researching wildlife conservation and education efforts in South Africa I came across an amazing little school/rescue center with a simple and powerful concept.  As I sorted through everything I’ve discovered, the Daktari school kept standing out.  It was time to make contact, so over the past few days I’ve had the pleasure of exchanging emails with Michele Merrifield.

The road to Daktari… and a Daktari Classroom.  Yes, it is way out there in the South African Bush! 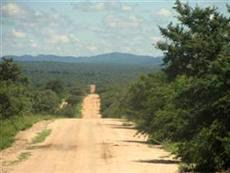 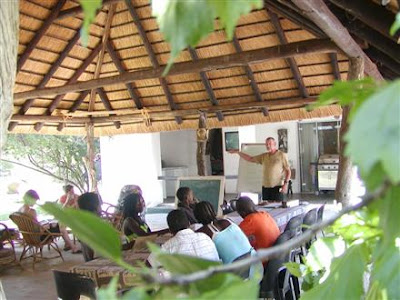 Michele and her husband Ian are the founders and operators of Daktari. Injured or orphaned wildlife, like Spikey the baby porcupine, arrive at Daktari each week as do between 6 to 8 local school children. 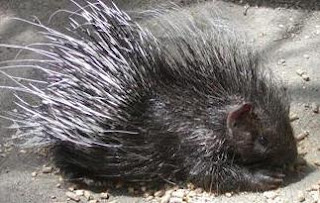 The children stay for 5 days.  They learn to take care of the animals and interact with them while also keeping up with their math, reading and geography lessons.  The children leave transformed, with a connection and compassion for the animals who share their world.  These children are the conservationists and wildlife advocates of the future.  Well, who needs to wait that long?
Let me share a clip from Constant’s (Karongwe Game Reserve) letter to Michele and Ian regarding their impact on these young lives:

“One morning in August 08 I had a phone call from someone in our surrounding trust areas who asked me whether I could help him with a problem that he had. This person had a leopard that was busy catching some of his calves and asked for my assistance. When I asked him why he called me and he told me that his son went to Daktari and they were taught not to kill any animals unnecessarily…..

Not long after that I had a call from people in the Balloon area that had a problem with a “leopard with cubs” that was catching their goats. Nature conservation asked me to go and have a look for them. On my arrival we discovered that it was indeed a female cheetah and cubs and not a leopard as assumed. The farmer then ironically said to me that the cheetah and cubs was not a problem as his son/daughter told him that they are not as bad as always thought. Intrigued by this I asked him whether they were taught this at school and he said yes, at a special school called Daktari.”

How in the world do Michele and Ian do this way out in the middle of nowhere?  Not without a great deal of hard work.  Michele tells me that volunteers from all over the world who pay for the experience of spending one, two even as long as a month with them are Daktari’s mainstay. 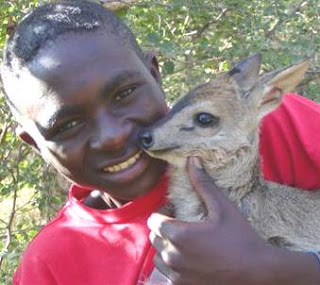 100% of your donation goes to help people saving wildlife