Small, but off to a hopeful start. $1,135 was raised in six days for 4 projects. 100% of which goes directly to the requested projects. 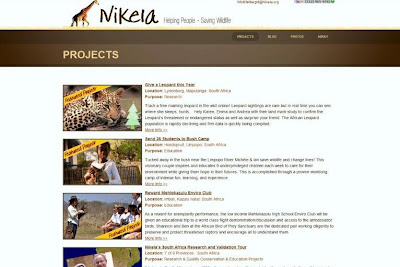 Saving the Leopard.
This beautiful solitary cat’s very survival is at stake. It is our privilege to connect people like you with wildlife conservation projects that make a difference.
Two of these projects help Will and his team capture the movements and behaviors of four free roaming leopards. The data they collect is crucial to determine the endangered species status of the African leopard.

One of the projects helps fund the tracking collars that pin points where Grace, Bo, Lucky and Nhovti hunt, sleep and roam. The other helps buy camera “traps”, batteries and supplies to capture photographs of the free roaming leopards in specific locations in the study area.

Raising Up Wildlife Advocates.
The wildlife’s future lies in the hands of the rising generation. Ian and Michele believe so totally in this that they invested their retirement into developing a bush school that changes lives. Enough funds were raised to send …. more kids to a week long camp. With your help we’d like to sponsor … more as soon as possible.

Kids Learn to Save Raptors
As a reward the students in the Enviro Club from an impoverished school visit Africa’s largest bird of prey sanctuary. Noone experiences Shannon’s flight demonstration without gaining a huge respect for the raptors and a love for this petite woman of passion. Even more importantly myths about owls and vultures are broken to prevent their senseless killing.
>>>Stay tuned: A pilot project is in the works to instruct the entire high school to their vital role in wildlife conservation.

Thank you for your support and we look forward to growing the Nikela community in 2011. With a little from a lot we can make a difference for the leopards, children and all the South African wildlife