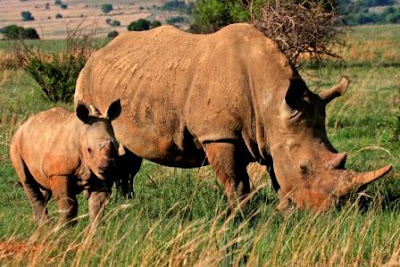 2010 turned out to be the deadliest year for the rhino’s living in South Africa. Only a couple of weeks before we met with Will and Carol in early October one of their four rhino was savagely dehorned and left to die.

According to, Robin, my young anti-poaching friend in South Africa the final death toll for 2010 stands at 308. A staggering loss, almost triple of the number from the previous year, and that’s not counting the orphaned calves that died from personal injuries, starvation or trauma.

Amongst all this tragedy there are glimmers of hope for the rhino’s survival as locals band together to ward of poachers and trained anti-poaching professionals are brought in.

Les, is one such anti-poaching professional. This coming February he is travelling to the USA to strategize with us. Together we plan to launch an awareness and fund raising campaign to assist anti-poaching efforts to do our part to make 2011 a much safer year for the rhino.

One way you can help right now is put me in touch with the person who can introduce me to Marc Ecko. Marc is the founder of the Ecko clothing retail stores head quartered in New York. What does Marc have to do with rhinos? The rhino is the clothier’s mascot or logo. Why? Because, according to the young store clerk I spoke to at Grapevine Mills in Dallas, the rhino is the only animal that runs only forward. Marc sees only one direction for his company… forward.